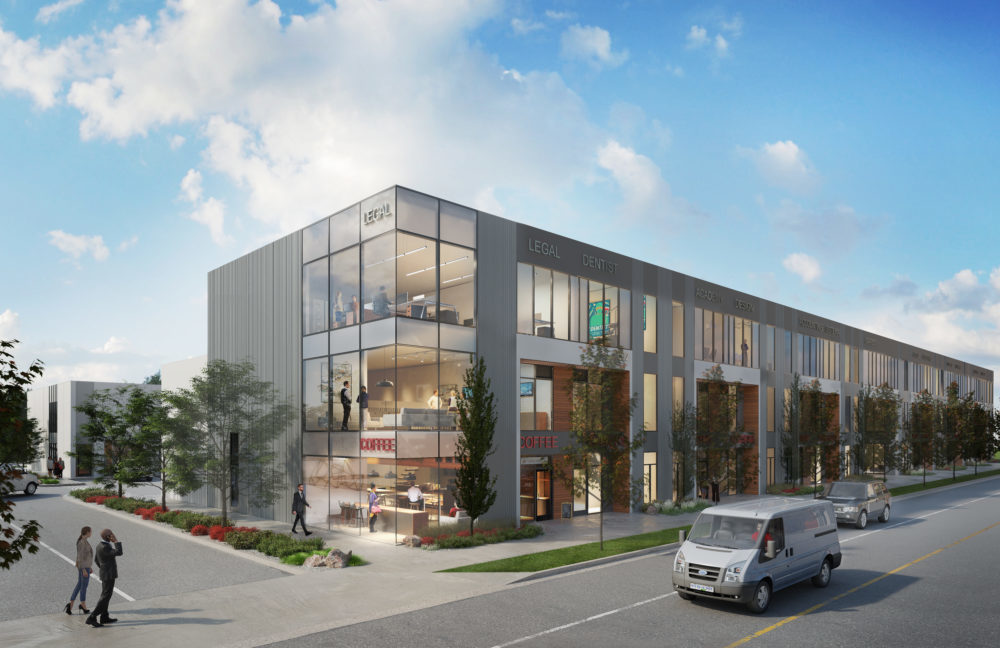 Denciti Development Corp., says the West Kelowna Industrial Park will eventually be the largest industrial park in Kelowna and the first project of this type in the area in seven years. It comes as the Central Okanagan region faces critically low industrial vacancy rates.

Denciti, which launched last year, is building the new multi-phase strata industrial business park at 2648 Kyle Road. The 10.3-acre site is one of the last large plots of developable freehold industrial land in the region. It could eventually comprise 200,000 square feet of workspace across up to 90 units.

Kelowna’s regional industrial vacancy rate has fallen to 1.65 per cent and local businesses are finding almost no opportunity to own space in the area, the developers say.

Construction is set to begin this spring on the first phase of the park, which will include two buildings with bay units of 1,500-2,500 square feet for a total of about 60,000 square feet, he told RENX in an interview.

“We have a six-building scheme, but the market will largely dictate its final configuration,” he said. Depending on the configurations, it will contain small and medium-sized units up to 10,000 square feet.

“We found that the market is ready for (this project),” Fawley said.

The industrial vacancy rate in Kelowna and the surrounding area has dropped by more than three per cent since the second quarter of 2016, according to Colliers International’s regional industrial market report for 2018. New supply has not been keeping pace and the last new comparable business park in the area opened about seven years ago.

The Kelowna market is as tight as the Lower Mainland industrial situation, said Steve Laursen, a commercial broker with Royal LePage Kelowna, which is marketing the project for sale.

“We have a lot of demand for industrial product,” he told RENX. “It seems that when you put a listing out there for something for lease these days, it is gone rather quickly and when good solid product comes up for sale, it goes very quickly as well.”

Companies in Kelowna are also looking for larger footprints than they were only six years ago, he said.

Most of the developable land in the area is owned by the local First Nation. “There is very little freehold land available in West Kelowna and there hasn’t been much development going on there in the last few years,” Laursen said.

“We did a complete calling campaign to every single industrial occupier in West Kelowna and the feedback was that everyone was looking to expand,” he said. “They loved the opportunity to be able to finally own in West Kelowna and/or lease, which we are doing as well.”

Laursen said Denciti expects the buyers to be mostly owner-users in the distribution, manufacturing and trades industries, as well as people looking for office and storage space: “It’s five minutes away from multiple national retailers, 11 minutes to downtown Kelowna, and 25 minutes to Kelowna International Airport.”

The completion of the first two buildings is expected in early 2020.

Fawley co-launched Denciti in spring of 2018. He said he has experience developing various types of properties under other banners in Kelowna for more than 20 years.

“Collectively we’ve done over $2 billion in real estate (developments) and we’re focused on urban residential and commercial,” he said. “My own background goes back 42 years starting in Calgary (where a partner and I) started a development company . . . in the 1970s.”

His new team at Denciti will focus on the Vancouver, Victoria and Kelowna markets, he said. 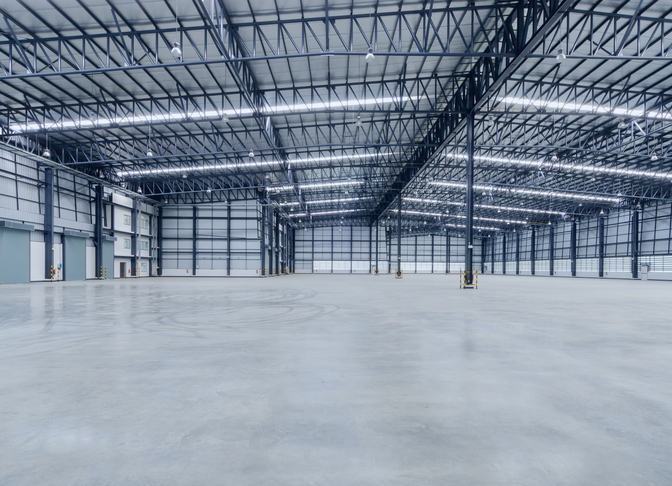 The Canadian economy is remarkable. It topped $2 trillion in size last year, supports a population of over 35 million people and has a remarkably sustainable construction sector that will likely start some 220,000 new homes this year and initiate some 280 million square feet of new commercial, industrial and institutional construction.

This year started with significant tailwinds from remarkable employment and economic growth in 2017. Almost 425,000 net new jobs were created in 2017 – a 15-year high – and the economy advanced just over 3 per cent, which is among the fastest- growing years since the recession a decade ago.

The guide is founded upon Altus Group’s proprietary database of project costs, which includes project data from over 1,400 Canadian cost and project management engagements in 2017 alone. Drawing upon this comprehensive catalogue, Altus experts have analyzed the information and provided a succinct summary of the findings for each major market across the country. 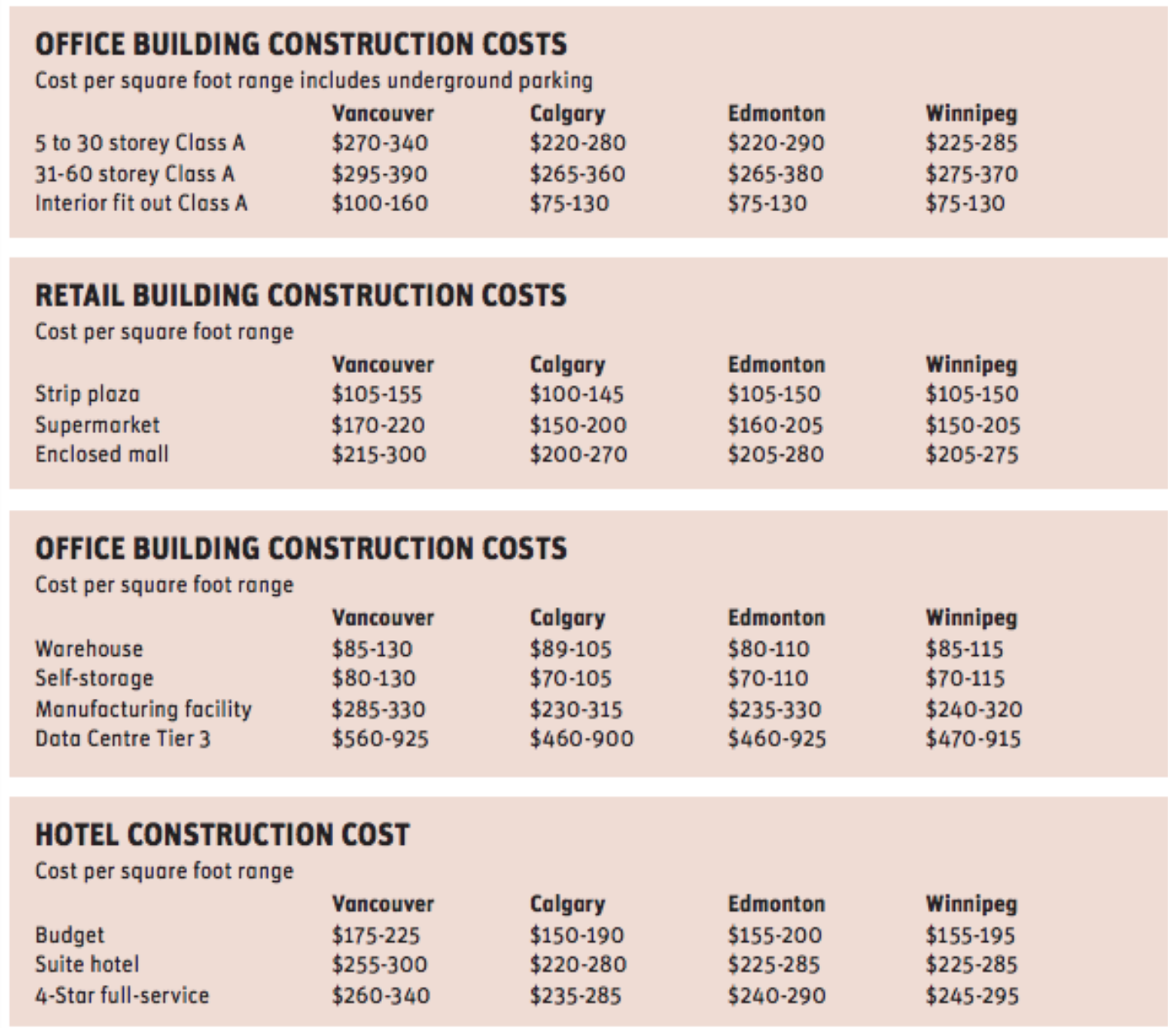 “According to the result of the Rental Market Survey conducted in October 2017, the vacancy rate in the Kelowna area declined to 0.2%, compared with 0.6% in October 2016.1 Continued tightness in the rental market can be attributed to a variety of factors including a significant increase in rental housing demand outpacing supply, the rising cost of homeownership relative to rents, rising enrolment in post-secondary institutions, strong population growth and growing employment opportunities for young people.

On the supply side, the primary apartment rental universe expanded by 289 units between the October 2016 and October 2017 surveys. These additions to the rental universe, which were mostly bachelor units, were insufficient to meet strong demand for new rental units.”

The largest city – 127,800 residents – between Metro Vancouver and Calgary, Kelowna is the dominant trading centre for the Okanagan Valley, B.C.’s third most populous region. Together with neighbouring Vernon, West Kelowna, Peachland and Lake Country, the greater Kelowna area has a population of 256,216, up 7.4 per cent from 2011. It also has a blossoming high-tech sector, which has rocketed in the past few years into a $1.3 billion industry that involves more than 200 companies.
END_OF_DOCUMENT_TOKEN_TO_BE_REPLACED

“Steve went above and beyond other commercial agents we have worked with. I found Steve to be knowledgeable and well connected. He was patient, persistent, and instrumental in helping us to get a great property that met our needs. We will use Steve in future transactions.”